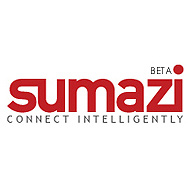 www.beta.sumazi.com/
Sumazi is a service built on top of Facebook, Linkedin and Twitter that empowers your network to introduce you to the right people. Existing social networks reinforce connections with people you already know. However, they don’t connect individuals and businesses with new, potentially valuable people and opportunities. Sumazi was one of a handful of companies selected out of more than 1,000 startups to compete at TechCrunch Disrupt Startup Battlefield, where it won the Omidyar Network award for the startup “Most Likely to Change the World.”